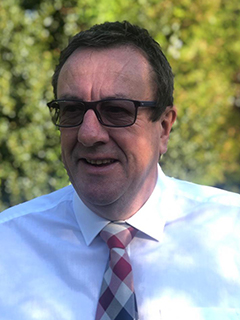 Martin has a total of 40 years of experience in highways, starting his highways career with local government in the early 1980s. He subsequently moved to Buro Happold, a global design consultancy, in 1998, where he held a number of strategic roles in the UK and overseas. He became a Partner of the firm in 2008 and Director of Management Consultancy, leading a team on UK and international projects but ultimately opting to retire from the partnership to focus on the collaboration agenda in UK highways.

In 2012, he established the small consultancy ToweyDuffy & Co, and enjoyed working for a whole range of clients in the public and private sector. He joined Kier Highways as their Collaboration and Improvement Director in 2017 in order to forge even closer relationships with clients and the supply chain partner. Following his retirement from Kier in 2019, Martin jointly formed the consultancy D2M2, helping tier 2/3 organisations to engage directly with public sector clients. He was appointed as the CEO of the Local Council Roads Innovation Group (LCRIG) in 2020 to mould a frustratingly fragmented local authority highways sector by bringing together those who fund, manage and maintain local roads for the greater good of the highways community.

In 2021, Martin was appointed as the Chairman of North Yorkshire Highways, which aims to provide greater flexibility in the way it delivers highway maintenance work on the county’s 5,750 miles of roads, - the largest network in England. He has been involved in a number of government and industry initiatives, sat on numerous boards, and produced guidance documents on investing to save strategies, infrastructure procurement methodologies, and collaboration directly for Department for Transport, Association of Consulting Engineers, Institution of Civil Engineers, and Highways Term Maintenance Association..

For first-class procurement specialists and consulting, call DMsqd and find out more about what we can do.

Our team has worked closely with councils in the UK to oversee the implementation of a range of highway and transportation services, along with playing a key role in larger infrastructure projects in the Middle East, covering a range of areas including options appraisals, infrastructure procurement strategy, and contract awards.

Take a look at the case studies below to learn more about DMsqd’s procurement specialist and consulting service.

Your E-mail has been sent. We will be in contact with you soon.

Please refresh the page and re-submit the form.

SORRY
Your content caused an error and your email has not been sent.
Please remove any unusual characters and try again